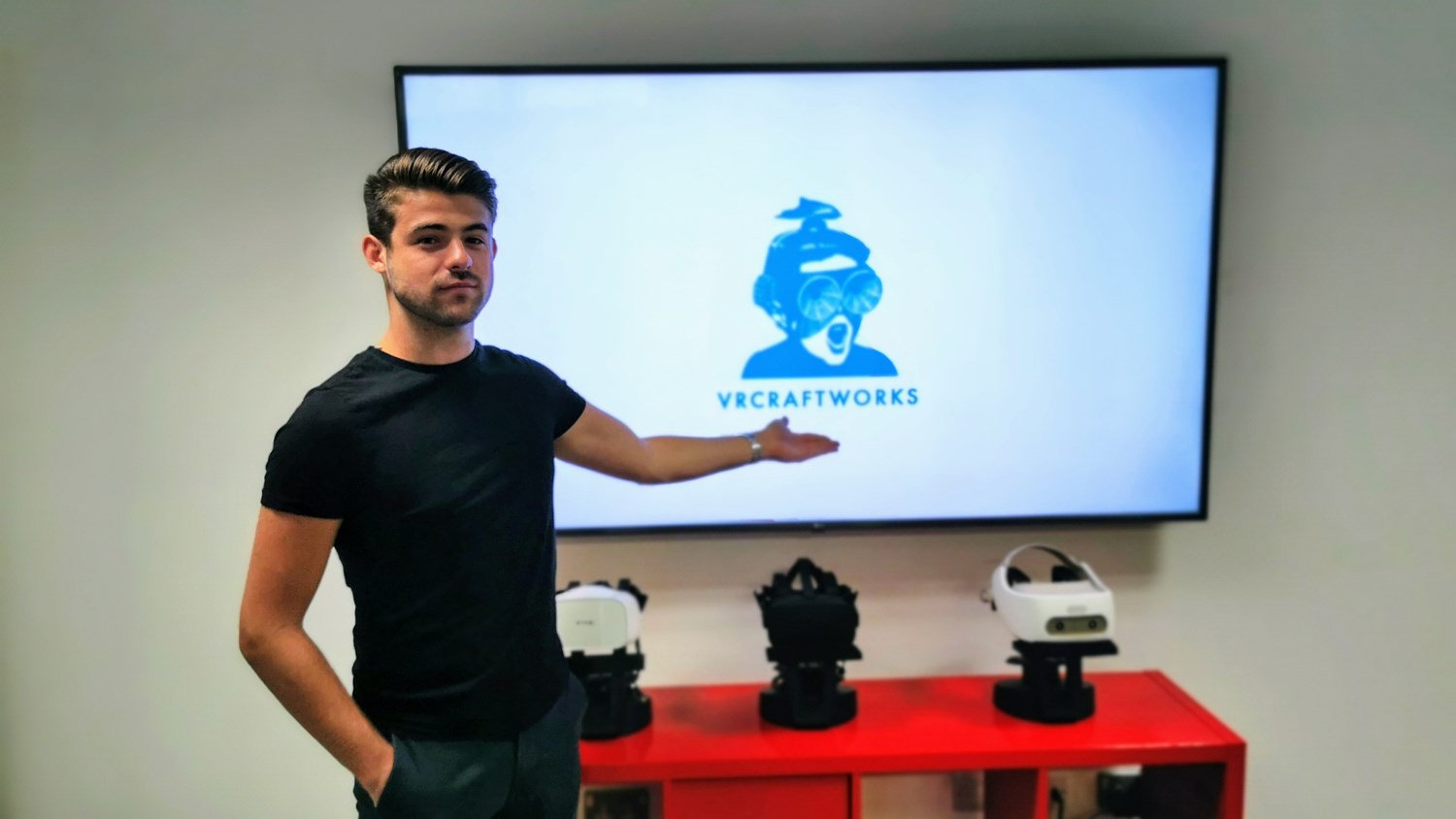 We sat down with Jack Maddalena, Co-Founder and Sales Director of VRCraftworks to hear about their recent work and experiences at the FuseBox.

Hi Jack, can you tell me a little bit about yourself, your background and how you got into immersive?

Do you remember the blue and red lenses you used to get in cinemas back in the day to watch 3D movies? Well, when I was young my dad and I were very interested in these and wanted to see what we could do with that technology. So we created a 'VR cave' in our basement using three second-hand projectors which we put up on the three basement walls, paired up with homemade 3D TV shutter glasses which caused the projections to pop out of the walls. Ultimately my childhood was my dad scaring the life out of me with things jumping out the walls!

From there, we found ourselves on a bulletin board called MTBS3D, where we were designing the first 'consumer' VR headsets. At the time there were only flight or military simulators costing more than a quarter of a million pounds each, but we just wanted to create something we could all enjoy and play. If you want to know what the first consumer VR headsets looked like, imagine shoe boxes with big lenses, totally taped up and running a really awkward version of Android from Asia. Imagine Robocop, but with the inners exploded out. And that was sort of the first commercial VR headset.

We were sharing code and findings on this bulletin board when one of the guys, Palmer Lucky (going by the name PalmerTech), said “Hey, let's do a whip around for cash. I’ll take all the findings and code and build us all headsets.” So he launched the Kickstarter that famously created the headset Oculus Rift. Some years later Oculus was sold to Facebook for $1Billion!

Well, my dad and I didn’t know anything about mass producing hardware so we went down the software route. We created an application called Orbulus which was voted as one of the top 10 VR apps to download from a number of publications around the world. After receiving half a million downloads in just four days, Google suggested we should help them build the SDK for Google Cardboard, since at the time there was no infrastructure and all VR apps had to be built from the ground up.

We did some consultancy work with Google in that time. We then started having more organisations coming to us with requests, and we decided to form this company in 2014. Shortly afterwards we expanded outside of VR, making us an 'immersive agency'. We create bespoke experiences for organisations all around the world, be it virtual reality, augmented reality, training simulators, PR stunts, marketing, data visualisations, story narratives and everything in between.

What have you been working on more recently?

A couple of weeks ago I was in Dubai where we did a project with Hilton. We worked with them last year creating new room designs for their sub-brands. We made an AR experience where they can hold a tablet up in front of them and we virtually overlay the room. They could walk around and find hotspots with more information where the rooms were yet to be built.

So Hilton invited all the GM’s and franchise hotel owners to come in and see what the new rooms would look like. As a result, we were joined by two different hotel sub brands last year. This year we demonstrated the AR experience to a third one called Motto. They were all very happy with it and it was an excellent little project!

Even more recently, on Monday, 9th December we launched a campaign with JD Sports - an Instagram effect themed around Christmas. They have an iconic duffel bag which you can wear in the filter and when you open your mouth the bag spins around you. It generated just under half a million impressions in under 48 hours! So we are looking into  growing this into more work since it’s been such an effective marketing piece for them.

We’ve also been working with a charity in Wales on a great feature piece. The project focuses on how the charity can educate their audience about other people's backgrounds and heritage, and what struggles they might have gone through. The goal is to build up a greater sense of community amongst local residents.

Do you ever struggle getting other businesses, especially potential clients, to understand the value in immersive?

Yes, it has always been a learning curve, even when we were doing consultancy work. Audiences need to understand that this is still a new medium and most people have never experienced VR before. Or, if they have, it might have not been very good. Therefore, you need to educate or re-educate potential clients from scratch. A common issue to get them to understand is that people go to the mediums that they are used to: TV, film, video and photos, which don’t necessarily transfer to VR. VR is a whole new vehicle for storytelling. One of the things that I know sounds really simple, is that first you have to understand how we perceive reality, and then you can understand how to get maximum value from augmented or virtual reality. This is something that a lot of people don't appreciate yet.

Once you establish that understanding with a new client, they are able to see the value they can get out of it. But then again, you don’t have a chance to speak to everyone individually about the benefits of VR. It’s a balancing act that you have to get right. I feel like this has been personally challenging for me as a Sales Director, and I’ve honed in on and I have been changing and adapting my strategy ever since we started. One major contributing factor is that there isn’t anything else like us on the market, so there are no guides to follow and it has been trial and error the whole way.

Our sales technique, for instance, has been a mixture of being in the right place at the right time for the right client. And there’s not a lot of them! It means making sure that when you have that opportunity, you convert it, especially if they are looking for this type of service. Or, they might say they’re looking for this type of service, but 80% of potential costumers come to you with an initial idea that ends up looking completely different once you finish. Once you start nailing down specifically what they want to achieve, they can very quickly find out the initial idea won’t reach their goal.

VRCraftworks is now in the fortunate situation to have quite a lot of repeat business. We’ve been growing the team, and now we can be proactive with the clients that we already have. We can come up with ideas for them that we know will work and achieve the numbers they need. And we’ve been seeing great results! For example, the recent JD Sports project was completely proactive and has been a great case study for this approach.

Have you got a particularly proud moment of your time here as a business?

The FuseBox is a very special place which acts as a conduit for very talented people with diverse backgrounds and skill sets. For example, if you ever meet Simon Vaughn from Creative Giants, you simply have to go for a beer with him. Do it, because that man has got some interesting life stories and he is really good at what he does! He has a very unique set of skills and he’s very creative. You have so many people here that are creative in different ways. I think the FuseBox gives you that ecosystem to explore. Also, if necessary, you have the ability to fall back on other people’s skill sets within the community here.

For instance, Simon and I have been working on a couple of art projects together. We’ve done something with Adam Neate, who was one of the best street artists in the UK, if not the world, in 2008. The project involved converting one of his pieces into a virtual world so you can step into his art and take photos of yourself within that art. This was all through Instagram and it was a bespoke piece for him. When that piece of art is sold, only the owner will be able to view that immersive world. This is another element of the work that has been really interesting to explore with him.

Do you think it’s more important for companies that use emerging technologies to collaborate with others?

Brighton is a very good place to collaborate with people. It is a very unique place. I've heard that something like 92% of all Brighton businesses employ less than 10 people, which includes us as well.  We have had to be very lean in this market and it’s only recently that we’ve had repeat business. Regular work is something you don’t usually get in immersive unless you do something like training simulators for a big companies with large maintenance contracts. It’s very easy to scale something like that but we had different ambitions within the company and different things that we wanted to explore.

Collaborating really makes sense for us. We discovered that often you’re better off bringing somebody in who has specialised in a particular area to make sure that the results are perfect for the client. It creates better experiences and brings in new ideas. Because the VR marketing field has been a growing slower than the VR gaming market, we've had to be very critical with what we're looking to achieve. We've succeeded because we are lean and have a small team, which keeps our running costs low. This means we can survive over long periods of little work. But once we have a project in, we bring in the experts that we need to complete it. We’ve been very particular with how we grow as a company and I highly recommend collaborating, especially in the early stages.

How has the team grown recently?

There’s officially eight of us now. Nick Slack joined as a Technical Director. Me, Peter and Nick are on director level. Then we’ve got Zoe, who joined recently as Customer Success Manager. She has been keeping us all in check and making sure everything’s going smoothly. She’s doing an amazing job with that! We are also looking to bring in somebody new in the new year.

Unfortunately, the FuseBox can't host the entire team now that we've grown, so we are moving some people out. But we still want to be a part of the community and I am going to try and be based here as much as I can! We get so much out of being part of the FuseBox community.

You can email me at [email protected] or you can go onto our website vrcraftworks.com and contact me through there.