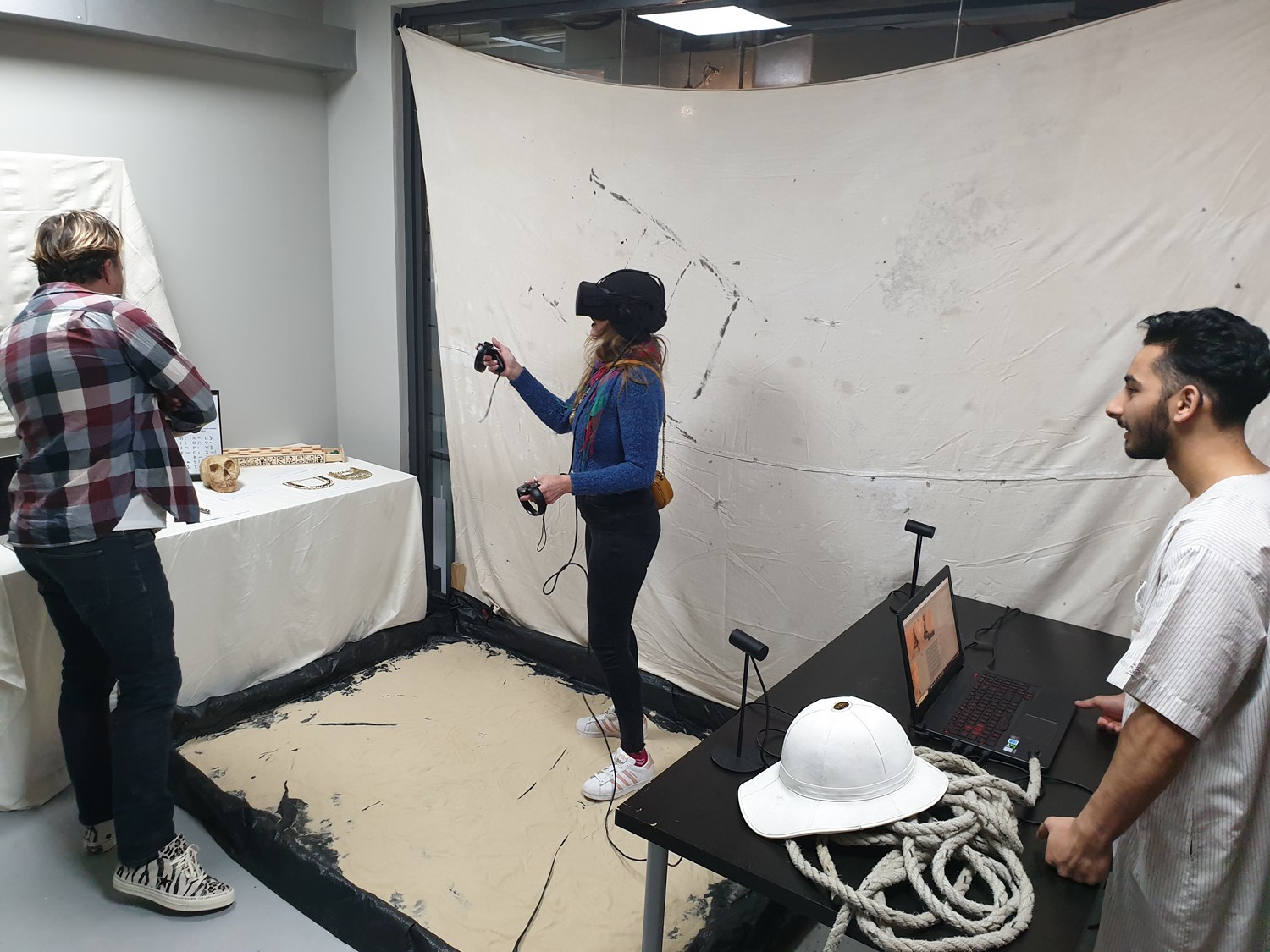 Can you tell us a little bit about yourself and your background.

I’ve been working in theatre for the past 10-12 years. As a theatre producer, mostly on the fringe and touring a little bit for West End Companies. Recently, in the last few years I have got more into immersive theatre and escape rooms and decided to bring some digital immersive technology into that as well.

How did you introduce the digital elements?

It’s very new to me, I had a bit of experience with things like photoshop but not really anything beyond that. Then I did a five day course at TOMTech last year that inspired me to do some more things with VR. I’ve always enjoyed trying VR experiences and thought it’d be really interesting to see for myself how it was done and if I could apply it to projects that I had ideas for.

What initially attracted you to Immersive?

I remember loving going to promenade theatre shows as a child, and then a couple of years ago I went to see Alice’s Adventures Underground in London and learning more about things like PunchDrunk and that side of theatre. It’s so different to just sitting in a room and looking at people on the stage. Instead you get to actually follow characters around the place.

I think immersive theatre has just really taken off in the past few years. There was so much going on, it seemed crazy not to bring immersive technology into that as well. The idea of just being suddenly transported into a completely different environment and being able to leave the real world behind is exciting.

I got Arts Council funding for the project that I am working on. I had been to a few events at the FuseBox such as the Immersive Show and Tell, and I’d met several of the FuseBox residents who encouraged me to apply.

It’s called “Under the Pyramids” and is inspired by an HP Lovecraft short story about Harry Hourdini getting trapped in an ancient Egyptian tomb. It encompasses live performance work, VR elements and escape room puzzles.

How did all the elements come together?

Under the Pyramids was a similar process; since my degrees are in classics and drama I’d maintained an interest in the ancient world. I liked the idea of doing something set in ancient Egypt and a friend of mine mentioned this short story. After reading it, I realised it would work really well as an escape room, because of Houdini’s experiences with magic and escapes.

Again, I knew I wanted to do something with VR. And there’s so many, weird, crazy hallucinations that he sees in the story which you couldn’t easily recreate in real life. A theatre version without a massive budget would look a bit tacky, whereas the VR elements would be able to add that extra level of horror.

With this project. What has been the biggest challenge so far?

Learning the technology has been a very big challenge. Since I only had a very basic grounding from the course last year. I’ve mostly been self teaching and I’ve had a couple of sessions with Simon Wilkinson and FuseBox resident Andy Baker, which has been very useful whenever I get stuck. Additionally, learning the lingo and knowing exactly what to Google for when encountering a problem has been a steep learning curve. The challenge at the moment is figuring out how the real world and VR parts fit together with regards to synchronising timings.

If you could do it again, would you do anything differently?

I think probably more support from the tech people who know what they’re doing earlier on in the project. But at the same time, it’s useful having to do the troubleshooting yourself in order to learn.

Have there been any highlights from the project?

Showing the project at VR Lab and getting loads of positive feedback from people was a fantastic feeling. Because it was such an unknown, taking it out into the world for the first time, letting people use it who’ve never tried VR before and sharing their excitement. Over half the people who tried it left their email address to find out more about where it’s going next.

How do you think the evolution of immersive technology has changed the way we experience games and theatre?

I think it’s a cultural thing. There has been this massive shift in all kinds of art and games and it is certainly nice to be riding along the middle of that. I think it makes a huge difference to be able to enter a world someone has created rather than just watching them from the outside. It’s interesting to see how audiences are changing from a passive observer to participants which allows for more crossover between games and theatre.

Is it difficult to be a one person band when developing your own immersive experience?

Yes, it is very difficult. I guess I’ve got a reasonably good grounding in it from doing all the theatre producing over the years, because it still involves tying together all the different parts of the production and experience as a whole. It certainly is really useful to have somebody to bounce ideas off - like a mentor, who can suggest new ideas you hadn’t previously considered. I think it’s really important to share your problems with other people since they might suddenly come up with the perfect solution.

Do you have an idea of where you’d like to see yourself in five years?

This stage of the project finishes in mid November, but I still have plenty of ideas for where I want to go next. But after this has been showcased at Brighton HorrorFest I’ll probably take a step back for a little bit and try to reassess what the next steps could be after I find some more funding.

How can people can get in touch with you?

There is a FaceBook page for Atomic Force Productions, so that’s probably the place where I’m going to post updates about any cool stuff I’m working on!