The FuseBox is proud to welcome the innovative BRiGHT BLACK Productions to the space with new residents Myra Appanah and Simon Wilkinson. Myra is a BAFTA and Sundance award-winning immersive tech and VR specialist, running workshops globally. Simon is a transmedia artist, whose work incorporates audiovisual installation, VR, electronic music and performance media. He also produces work as CiRCA69 and has featured in Tate Modern’s Merge Festival (2011) and many other international events. 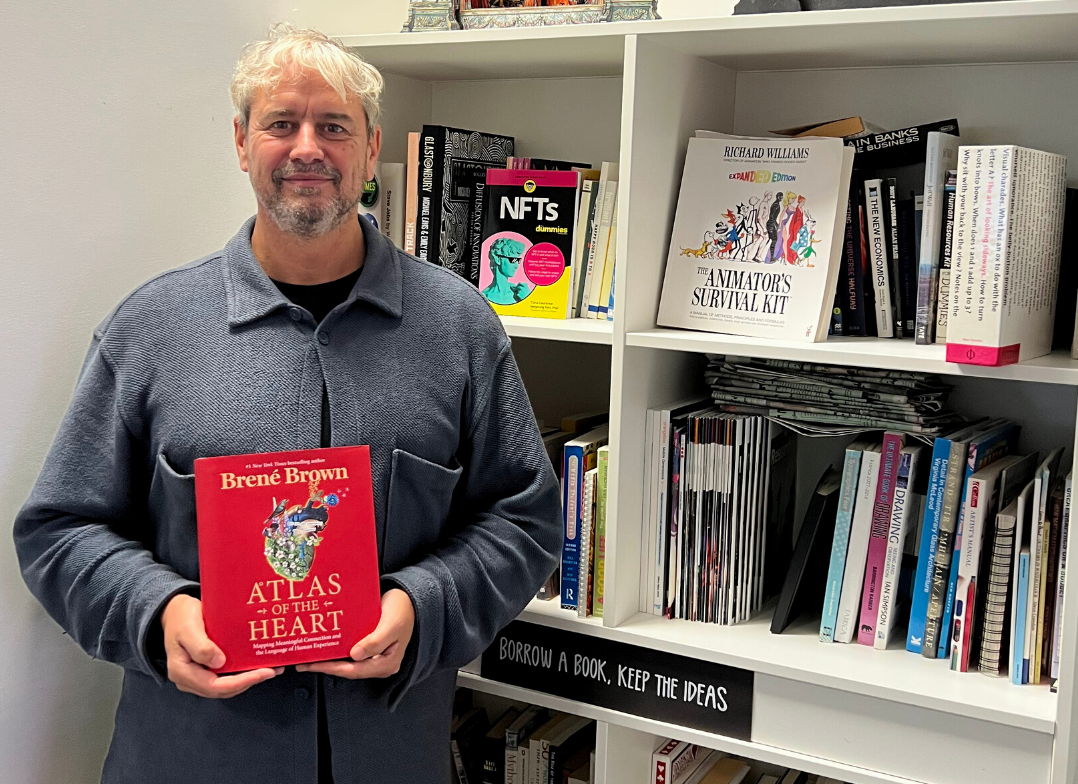 Following the FuseBox's recent successful Talking Tech on Virtual Production, hosted by Simon and Myra, we caught up with the BRiGHT BLACK creators to find out a bit more about them.

Simon: We met when we were working on a commission in Suffolk in London and began initially talking about history in the area. We were working with augmented reality and stained glass windows in a church.

When we started, we were two years into IT companies, trying to dominate that space. There was a lot of pioneering work around VR that was being directed with retrogressive non-interactive stories.

Myra: We both studied economics during different decades but for me, like background, it’s always been interesting to talk about the barriers that different people face for different reasons.

I had the privilege of going to University but not from the perspective of the arts and culture. My parents were both nurses and there were all these barriers to access the arts and culture sector. I didn’t know anyone in this sector and none of my giant family had worked in the creative field at all.

The closest I could get to this sector was going into creative agencies, which in itself became a bit of a fight because it wasn’t a legitimate job. I started in project management, then digital came in, and it was the first step. I was knocking on people’s doors and asking if I can do some creative stuff. When they said no, I was like I’m going to do it anyway. I started writing scripts, working in secret and doing creative briefs to build up my portfolio.

My first things were taking up culture and stories in non-traditional spaces. Doing live immersive projects with live music. We even created some live performance stories in nightclub venues and automatically the audience was totally different.

If you put the right stories in those spaces, then people come and they will engage with it.

Simon: My background was originally in music and part of that was electronic music. When you make your setup for electronic music, you basically make this monster that when you’re performing, you’re sort of controlling and you’re training it all the time. If you just let it loose, it’ll go wild and this is very similar to virtual production. We operate our VP computer in real time so that they change alongside our performance.

The past year has presented a lot of challenges, has that changed the way you've approached anything?

Myra: We managed to make a show during the pandemic with zero budget through developing a story out of 3 months with just laptops and experimenting. We created places from our childhoods, for example where my parents worked. Simon was creating this beautiful village at night. We combined these two moments from our childhood and linked them together to create where this story would take place.

We also started creating these immersive story labs and doing them over Zoom. All of these people all in one workshop with huge diversity in the room. If you consider the environmental impact also, removing the travel element and the emissions from travel and still having this massive audience online provides greater accessibility. So, for people that don’t want to ask questions in real life, they can ask online and post questions. This really helped us connect with as many types of people as possible.

The pandemic really showed that online - it’s telling us what people want.

Simon: The first three days of the pandemic were a challenge. We arranged a series of Zoom calls. That series of calls slowly linked to what we’re doing now, what we've built, Myra and I, and what we’d done previously.

We’ve now built these communities around the world. These are people we actually talk to because they’re friends but they’re also the audience. The pandemic made us develop this whole new way of doing things. We’d run a massive story and then start reaching international audiences globally, like in New York and Nairobi.

Myra: We started making the show in the pandemic under a different name and essentially, we received Arts Council Funding to grow it into an investigation into new ways of making live experiences. We are able to show how we can reach big audiences because we create this and that’s what we do in real life. We now also live stream on Twitch and we’ve made two game worlds, which are set in a night from our childhoods.

Myra: We joined back in July and were able to have a big space, a social environment, nice people around and a basic infrastructure for a show. It's been really beneficial. More people should definitely know about the FuseBox.

There’s definitely things within our upcoming show that wouldn’t have been possible without the space at the FuseBox.

Simon: The space is full of equipment and people that know stuff - the cost of that is very affordable. Eerily from another era. In the 1990s, there was community data, you could go any time to use a computer, there was an intermediary for access to film, there was an art club and passports to leisure. These things have been robbed from us, so it’s important to bring back access.

What are your future plans with the projects you have created?

Myra: We are in the process of building out shows that we want to get ready for touring, sustainably. These include Black Rabbit which can be parked into two suitcases. This is funded and supported by the Arts Council and as part of the Electric Medway Festival. 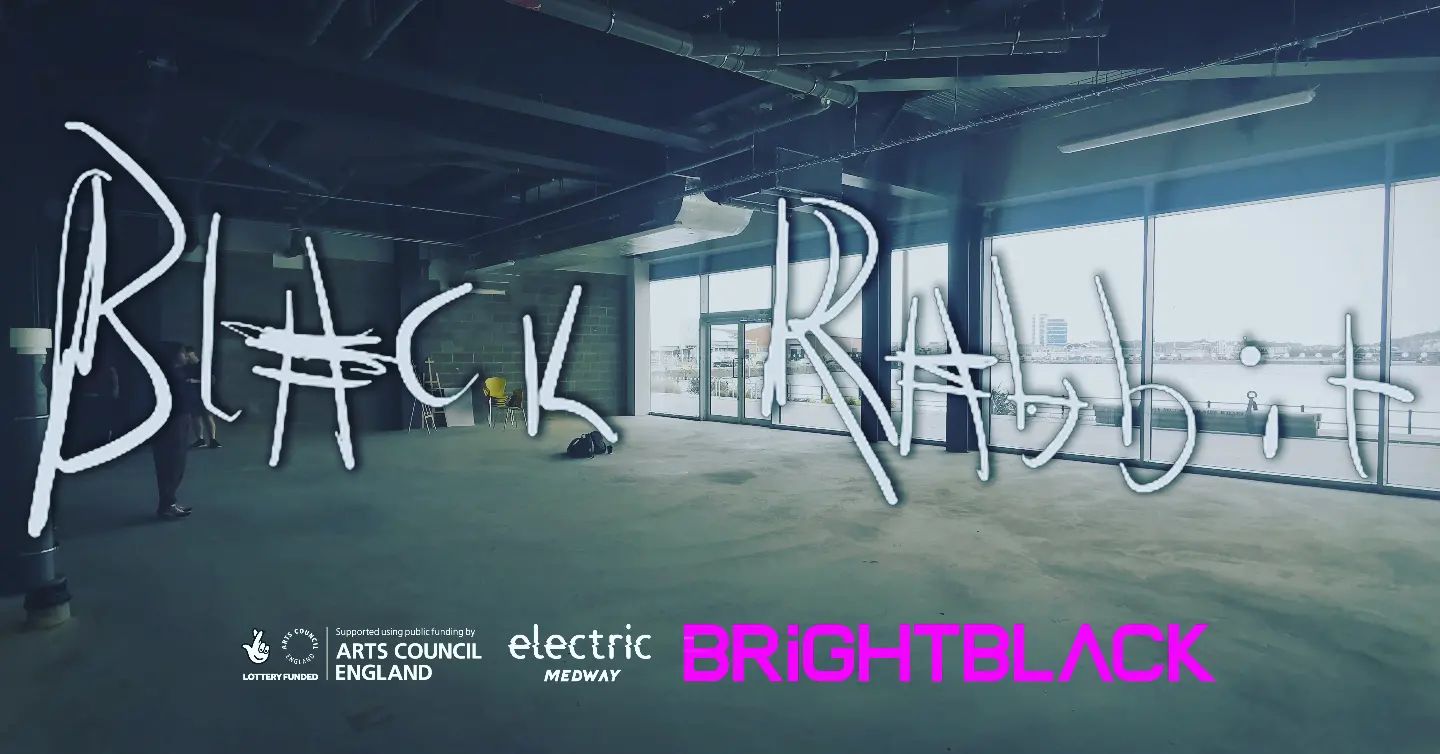 We’re also working with Hospice in the UK and Dying Matters on a piece called 1000 Conversations about Death, which is all about how we live in a death denial culture and we sort of casually talk about these really low income backgrounds. We’re talking to really young people that I’ve been working with about some of the shows we’re doing, tackling big subjects.

Simon: We are calling ourselves ‘artists’ but this creates expectations. One thing, the role of the artist has been really muddied when it comes to entertainment. If you think about one of the most successful artists, Banksy, it’s important not to have a boss. You are raising important questions that are creating paradigms.

Find out more about BRiGHT BLACK Productions and their upcoming shows here.

If you’re interested in joining the FuseBox community as a resident, contact us today and book your own personalised tour now.